You may have read, or at least be aware of, a book called ‘The Almost Nearly Perfect People’, by Michael Booth, which is basically a string of statistics that aims to shatter the myth of Scandinavian utopia (the most arresting of which is that 5% of Danish men have had sex with an animal).

I’m in Copenhagen, preparing the ground for my family who will live here for the next few years, and I have to say that, so far at least, the rose tinted spectacles are still firmly upon my nose. On one level, I’m sure Booth is right; The Danes are not perfect. How could they be? It’s just that with so many of the things that really matter, they seem to have got it sorted.

For the past 40 years, Denmark has regularly topped international happiness surveys, and which ever measure you use it’s always in the top three. Copenhagen is widely regarded as the happiest city in the world.

Take transport, the bane of most Londoner’s lives. Trains and buses are here are clean, punctual and have plenty of breathing space – if not actually a seat – even in the height of the rush hour. I suspect this is largely because practically everybody cycles practically everywhere. They do it without fuss or fanfare, without Lycra and, come to that, without helmets. It’s just how normal people get from one place to another. I have to teach my 6-year-old boy how to ride a bike. Not because it’s a wonderful and joyous thing for a father and son to do together – which of course it is – but because he has to get to school and back every day for the next 3 years and cycling is by far and away the quickest, easiest and cheapest way to do so. Out on the street, pedestrians, cyclists and motorist treat each other with a respect and consideration that shows the proponents (on both sides) of the UK car-bike war to be the small minded idiots that they are. 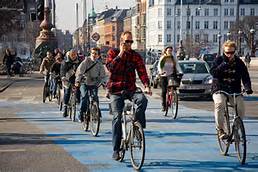 Recycling is automatic to the Danes. It would simply not occur to them to do otherwise. Lest they forget, little slogans crop up around the city, writ large on graffiti walls or as little notices in shop windows (all in English which may or may not hint at their target audience!); ‘One man’s trash is another man’s treasure’, and the rather more in-your-face ‘Pity the fools who don’t recycle’. The apartment complex where the family will live accommodates well over 2000 people. Every block has a comprehensive and convenient recycling centre. I have yet to see a single one overflowing, nor is the immediate area strewn with plastic bags and other detritus that seem to be a permanent feature of such facilities in the UK.

And then of course there’s food. Danes are avid consumers of organic food. Organic food accounts for 7.6% of sales in Denmark compared to 1.4% in the UK, and they predict a further 5-10% growth over the next 3 years. Even the ubiquitous ALDI has a range to equal the UK’s most proactive organic retailers. That’s probably because, here, the most proactive retailers are the discounters, accounting for over 42% of sales. If ever organic food had a ‘posh nosh’ image over here it’s long gone. It’s not just private consumers. In 2011, 74.5% of food procured for Copenhagen schools, hospitals and care home was organic. Not good enough, according to the local authority back then who boldly stated that figure needed to increase to 90% by 2015; I wait with bated breath to find out how they got on.

In the short time I have been here I have come to realise just how far the UK lags behind. I imagine there was a time when Denmark’s commitment to sustainable development consisted of a series of political buzzwords, thrown together into a raft of strategies. But they are way, way, beyond that now and as result their people are happier, healthier and have a more secure future.