One step forward, two back? Copper in organic potatoes

Earlier this month I witnessed something I thought I would never see – The organic movement successfully opposing the withdrawal (albeit temporarily) of an environmentally damaging pesticide. I speak, of course, of the copper based fungicide ‘Cuprokylt’, used by some organic potato growers to manage late blight. I accept that this means that we now may not see the massive reductions in organic potato production that were forecast, and that in itself is a good thing. My beef is that we’re in this situation because we failed to do what we should have been doing for at least the last 10 years.

For those of you who have a more active social life than me, and therefore perhaps don’t follow the ins and outs of pesticide regulation with quite the same zeal, this is the background: In 2015, the application to re-register ‘Cuprokylt’ was declined on the grounds of insufficient / out-of- date data. That meant that, as of the beginning of this year, it was not available to UK growers. However, a few weeks ago an emergency authorisation for its use was approved, bringing it back into service at least for the forthcoming season.

Copper based fungicides have always been permitted in organic growing, and this has allowed us to develop production systems based on the assumption that it’s always in the back of the cupboard when we need it. That in turn has allowed us to grow blight susceptible varieties of potato that we would not have otherwise been able to, and the organic market has grown very much enamoured of those varieties. Which is basically why, after a decade or more of copper reduction/ elimination being on the agenda, we still seem to be hopelessly dependent on it.

There are two basic problems with that: One, it accumulates in the soil to the detriment of soil life and ecology. Two, that being the case, its use runs contrary to the most basic tenement of organic farming, that of promoting and maintaining soil health. The latter issue is political as much as practical. Every time we take a stance on, say, banning Glyphosate, our critics cite our attitude to copper as evidence of, at best, inconsistency and at worst hypocrisy. 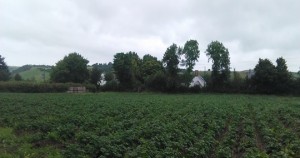 I am, I like to think, a pragmatic person. I accept that operating in the real world means that it’s not always possible to put all the organic principles in to practice all of the time.  Sometimes there is no alternative but to compromise. But in the case of blight on potatoes – and this is the crux of my argument – there are alternatives, which I discussed at some length in an article in the most recent issue of Organic Farming Magazine. The Sarvari Research Trust, Agrico and Greenvale, have all invested enormous resources in developing a suite a blight resistant varieties. Collectively they have range that covers the whole gambit of tastes, textures, culinary uses and maturities.

So you could argue, and I do, that the issue is less a technical one and more a marketing/ supply chain one. Many retailers, with some honourable exceptions, are reluctant to change their ranges to include more resistant varieties. They have a tendency to throw up their hands and say ‘We just give our customers what they want. If they prefer susceptible varieties, there’s not much we can do about it’.

This, and I’m being polite here, is complete nonsense. If, as a retailer, you really are committed to organic and sustainable farming then you need to bring your customers along with you. If we treated consumers more as active participants in sustainable food systems and less as passive purchasers, we might find them far more accepting of change than we imagine them to be. That has certainly been the experience in the Netherlands on the back of excellent and inspiring work by the Louis Bolk Institute and key retailers, and I see no reason the same should not be true over here.

For the moment, we are where we are, as they say. I just hope that the temporary authorisation is just that – temporary –  and it serves as a catalyst for action. Organic potato producers can live without copper, but it needs concerted action right across the supply chain.

Round about now would be a good time to start.

Tony Little grows organic seed of blight resistant potato varieties for Sarpo Potatoes Ltd, and works with the company to expand their grower base in Wales